What role do human beings play … (as part of the system)?

The digital transformation predicted by 2b AHEAD's Future Congress over the last ten years has by now become a reality in most industries. From AirBnB to UBER, to Google, new invaders have been breaking into established markets using the exponential momentum of IT development. There is no end in sight. On the contrary! As early as 2020, virtually everyone will carry a supercomputer with the power of IBM's Watson in his pocket—for the price of the average smart phone. Customers will come to trust their mobile devices more than they trust human experts, because the devices will be right more often. And this is only halfway to 2025!

Whether in commerce, banking, insurance, tourism, mobility solutions or engineering—the rapid transformation in business models will primarily follow one principal: between established "hardware producers" and the end customer, a software layer of data aggregators will appear. With their apps and electronic assistance programs, these will bring their customers real additional benefits while simultaneously acquiring customer data. The effect will be treacherous for some: earlier it was established companies who controlled the important infrastructures (production, logistics, and shops). This automatically secured power over the market. The new digitalization, however, severs ownership of infrastructure from the sovereignty of interpretation in the decision to buy. Of course, hardware will continue to be produced in the future. The power over consumer needs, however, will lie with the data aggregators. They will know when which customer has which need. They will then auction this knowledge to manufacturers. This represents a clear shift in power to the disadvantage of hardware manufacturers. In the near future, the rule will be: He who has the data makes the rules.

Those who view the internet merely as a new sales channel have failed to understand the logic of the new digital age. Success will not be a matter of the channel to the customer—decisive is the power over the return channel, for the data collected here will cause rapid change on the product level. In the world of algorithmic systems, differentiation will no longer occur between the standard products of various manufacturers. The opposite will be the case. Standard products will become increasingly similar in price and performance. The new opportunity for differentiation lies in the customization of the product—individually for each customer and situationally for her changing usage situation. In 2025, there will be no more standard customers who buy standard products with standard data protection levels for standard prices to meet standard target-group needs. Instead, a refreshing, humane logic will enter our business models: We won't have any standard customers. Probably we never really had them anyway, but we have forced our standardized products on the customers we do have. This will change. It will change on the basis of data analyses with which products and services will each be made adaptive under consideration of the desired data protection level of the individual customer (Privacy by Design). This will be the ground rule for the emerging "adaptive economy."

In short: In the year 2025, large portions of our lives, our work, education, the media, shopping, travelling, mobility, and even love and relaxation will take place on the basis of a digital operating system. Its apps will be the new gatekeepers that make the world livable because they reduce its complexity. So far, so predictable!

...But what role will human beings play in the operating system of life?

The signs are already visible: people are beginning to measure their lives and are thereby changing our business models! This is happening in medicine and food through calorie- and step counters. In the world of information, through Twitter and Facebook; at home through smart home controls; in mobility through Quicar, UBER and company; in manufacturing through Industrie 4.0, etc. There, where human beings become part of the operating system, they will function at the same hierarchical level as the given technology. The human being will be the sensor, henchman, and referee in the conflict between competing IT systems.

The 2b AHEAD Future Congress 2015 stands opposed to the modern Luddism of the anti-UBERists, the anti-AirBnBers, and the anti-Googleites, popular though they may be. The Future Congress aims to develop a vision of the coexistence of human and machine that is worth living. Because what we are seeing today with AirBnB and UBER is just a foretaste of what we will experience in this area in the coming years. 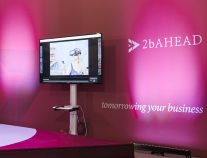